At Bakgården we brew our own beer. We do a collection of beers from lager to stout, which will differ over time. “Lars Lager”, which is one of our most popular beers won the publics prize at Östersunds Malt Festival 2018. Another clenching speciality, flavoured with spruce from pine trees, is “Bakgårdens light beer” and “Gran folköl”, which are lighter beers but still with a great taste. You can find our beers in some restaurants in Östersund or nearby. You can read more about the beers on the Swedish site. (in Swedish:)

If you are a group of people, we can offer a beer tasting event, with food if you wish. In November and February Gustav usually has a beer brewing course, where you learn all the basics in beer brewing. Keep your eyes open, so you don’t miss a place at the next course!

During spring we will introduce a new beer called RIPA – Revsunds IPA. It’s well hopped of course, but still has a good balance with the maltiness. Coming up att the Bolaget in beginning of summer. Later on we’ll introduce another new lagerbeer brewed on swedish malt. 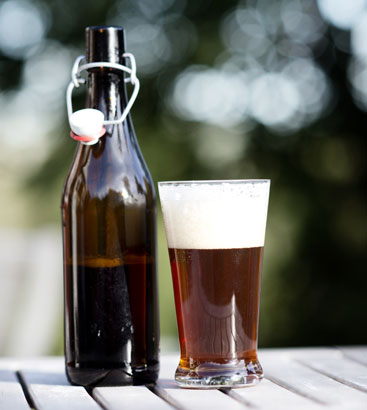